From 1st to 4th October, the Mies van der Rohe Pavilion participates in the Barcelona Gallery Weekend with the installation “Tres” of the artist Ignacio Uriarte.

Ignacio Uriarte was stunned by the materiality of the Mies van der Rohe Pavilion architecture on his first visit in 1993. In his own words, “It was as if I was looking at abstract paintings which happened to also be the walls of the building. I clearly noticed the way the minimalism of the architecture allowed me to see the materials in the foreground and understand their intrinsic value and innate expressiveness“.

On the basis of this experience, Uriarte has produced an installation which in the first place is a tribute to the materiality of the three types of marble used in the German pavilion, and secondly, refers to the architectural and urban vision of the future that it represents. The piles of crumpled sheets of paper refer to blocks of stone, not only due to their squareness but also on account of the creases that resemble the veins in marble. The composition in a 3 x 3 grid could be a reference to the town planning style of the modern city- blocks and streets in a grid format. There is also a clear reference to minimalist sculpture– Carl André’s biggest installations, for example, in which quite simple elements create rhythms in space. Numerically, the grid also refers to the three types of marble used in the pavilion. The different colours of the marble are reflected here in a degradation of the paper colour, from warm to cool white, from corner to corner in five steps.

The idea of crumpled and uncrumpled paper emerged from the cathartic moment when we crush a piece of paper into a ball and throw it into the bin. In the installation, this exercise is repeated more than 1100 times, with a twist: the sheets are smoothed out again, maybe due to regret or perhaps an attempt to retrieve something thrown out- a distant allusion to the story of the pavilion’s reconstruction. Formally, the act of crumpling and smoothing a piece of paper transfers writing or drawing material to the realm of sculpture, annulling it for its original purpose. Not quite. The creases can be considered as drawings, and they might even allow us to interpret emotional states. 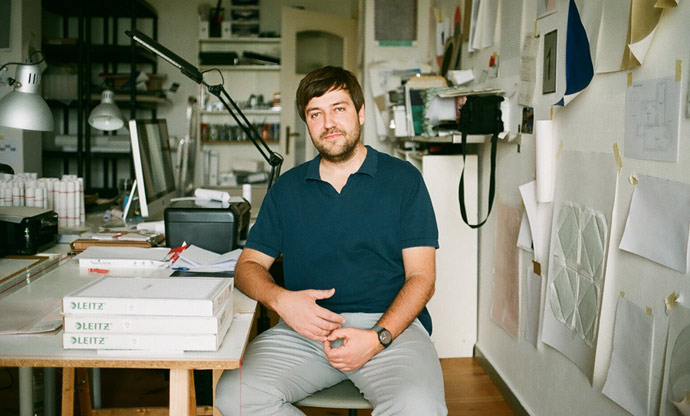 Ignacio Uriarte (Krefeld, Germany, 1972) studied Business Administration and began a career with a multinational company. The office routine and the moments of artistic creativity that emerged led him to study Fine Arts in Guadalajara (Mexico), where he came into contact with concept artists and developed a strict working methodology: a restricted field of research with a profound analysis aimed at getting to the bottom of the issue. Using minimalist and conceptual aesthetics, he has developed a meticulous, incisive and at times even obsessive practice in which words and narrative are foreign guests, while on the other hand, the performative aspect is the protagonist through agents such as gestures, materials, distance, repetition and time.