The Fundació Mies van der Rohe periodically invites artists and architects to provoke new looks and reflections through their interventions in the Pavilion.

After SANAA, Jeff Wall, Ai Weiwei, Enric Miralles, Andrés Jaque and Antoni Muntadas among others, this year Anna & Eugeni Bach will be in charge of transforming the Mies van der Rohe Pavilion with their project “mies missing materiality “.
The artistic intervention will turn the Mies van der Rohe Pavilion into a real-size model for eleven days, dressing it with a unique material to undress it of all its materiality.

On 8 November, the Pavilion began to lose its materiality and is gradually turning into a mock-up through an assembly performance involving the placement of white vinyl. From a platform located on the Pavilion’s esplanade, visitors can watch the transformation process, which will culminate on 16 November, when it will be open to the public, completely in white. At 1.30 pm, the architects Anna and Eugeni Bach will talk about the importance of materiality with María Langarita (winner of the Emerging Architect special mention of th European Union Prize for Contemporary Architecture – Mies van der Rohe Award 2013) and Carlos Quintáns (winner of a Golden Lion in the Biennale di Venezia 2016) based on the reflections of Juhani Pallasmaa at a round table discussion open to all.

“Dressing the Mies van der Rohe Pavilion to strip it of all materiality.

This simple act turns the Pavilion into a 1:1 scale mock-up, a representation of itself that opens the door to multiple interpretations about aspects like the value of the original, the role of the white surface as an image of modernity and the importance of materiality in the perception of space.
The Pavilion in Barcelona upon which we act is a reconstruction, a replica so faithful to the original that it is often difficult to remember its true nature. A building that should have been temporary was immortalised first by the written account of the modern movement and later by its own reconstruction.
Turning the Pavilion into a mock-up, with all the surfaces restricted to the same material, as white as it is indeterminate, reveals the building’s representative role—both that of the original, as a national symbol, and that of the replica, by representing the former. For a time, the Pavilion will be the longest-standing 1:1 scale mock-up of the replica of the temporary pavilion in modern architecture.
Removing all materiality from the Pavilion also raises other interpretations related to the historiography of 20th-century architecture.
The Pavilion in Barcelona was enthroned as an icon of modernity at the ‘Modern Architecture’ exhibition at the MoMA in New York in 1932. The exhibition catalogue presents various buildings by architects like Mies van der Rohe, Le Corbusier, Neutra, Wright, Oud, Gropius and others through a selection of photographs and critical essays in which Philip Johnson and Henry-Russell
Hitchcock indicate the homogenising criteria for combining all the works through the same lens. These include the white surface as an emblem of a new architecture, which appears as one of the most insistent.
To provide the Pavilion in Barcelona with that homogenising whiteness means to endow it with one of the defining features of modern historiography (not of modernity). Yet at the same time, it also involves stripping the Pavilion of its materiality and its unique characteristics—specifically the one that erected it as an icon of the modern movement.
The installation turns this paradox into an experience. It helps visitors to consider these ideas and many more through their own experience in a pavilion that will lose all trace of its materiality for a few days to assume all its representative potential”. Anna and Eugeni Bach 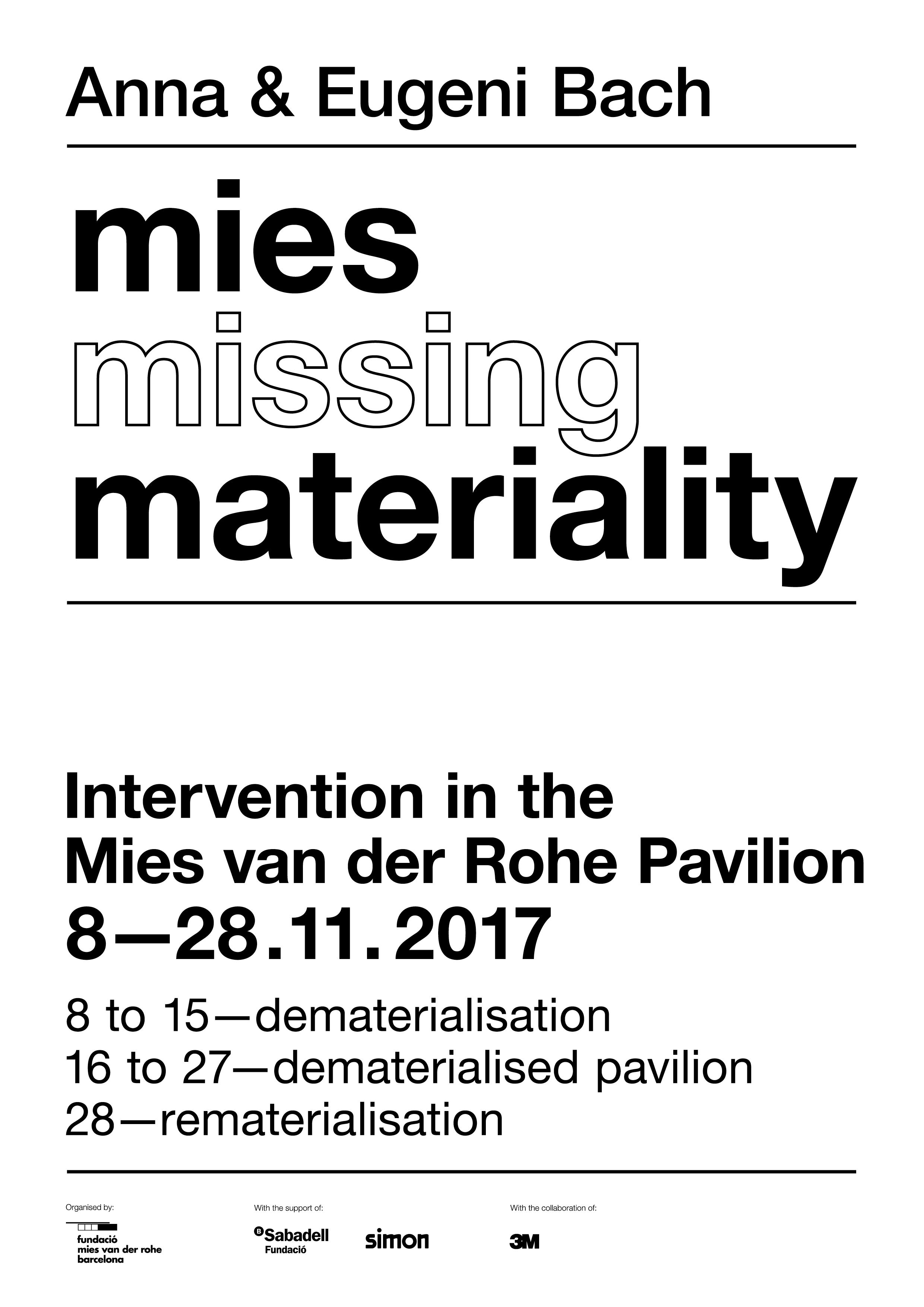 14-3-2019 presentation of the catalogue, the artistic piece and the short film