Santiago Borja’s most human and spiritual experience at the Mies van der Rohe Pavilion in Barcelona.

The Mies van der Rohe Foundation, in collaboration with the Chicago-based Graham Foundation, the Han Nefkens Foundation, the Banco Sabadell Foundation, the Foreign Relations Secretariat of the Mexican Agency for International Development Cooperation (AMEXCID) and the Mexican Consulate in Barcelona, presents a new work by Mexican artist Santiago Borja, “Suprasensitive: a project on astral bodies and invisible planes”. This project links the realm of the visual arts to architecture, and the esoteric to geometric shapes, abstraction and colour using videos, photographs and sculptures. The highlight of the sculptural work is a textile designed by Santiago Borja to clad the Pavilion interior. Borja interprets architecture from an anthropological perspective in order to speculate and breathe life into inanimate objects.

The July 22nd will be celebrated the conference with the presence of Dr. Spyros Papapetros, profesor of History and Theory in the Architectural Faculty of the USA Princeton University. He will talk about animism and architecture linked with the Mies van der Rohe work.

Santiago Borja’s address on “Suprasensitive: a project on astral bodies and invisible planes” at the Mies van der Rohe Pavilion is based on his research in recent years into the historic references at the start of Modern Movement and the influence that early 20th century esoteric practices in Europe have had on him. For Borja, the development of modern architecture and the language used in its interpretation and theorizing contain traces of these influences, which are most obvious in the prevailing lines of analysis, particularly phenomenology. Using the tools of the visual arts, he detects a connection between architecture and esotericism, which he sees as a sign that modernity was inspired more by mysticism and spirituality than by the inculcated notion of rationality. He locates the source of these esoteric practices, which sought to give a different meaning to life, in a natural reaction to the birth of industrialization and mechanization in the late 19th century. The resurgence of the same practices today may well be a response to the same constraints imposed on us by modern life.
Santiago Borja proposes the reinstatement of this generating presence in architecture through the work of an esoteric group that practices eurythmy, a corporal experience that seeks a holistic approach to space through a series of encoded movements in which the macrocosm and the microcosm are intertwined. Rudolf Steiner and Marie Sivers developed eurythmy in the early 20th century. They believed that the cancellation of the expressive body reveals the intrinsic movement of the person in the cosmos. The etymology of this kind of spiritual gymnastics is related to the “harmonic proportions“. It was connected to architecture from the outset. Eurythmy, in contrast to dance and theatre, consists of going through a series of moves focused on the body aimed at perceiving rather than expressing itself. It is thus not intended to convey emotions, ideas or a technically harmonious control over the body. This is not movement that responds to a musical score or an interpretation of a story. In essence, eurythmy opens up a world that is normally invisible and can lead to borderline experiences between the physical and the spiritual world.

The Mies van der Rohe pavilion is a paradigmatic example of what the artist calls tautological architecture; an architecture built solely to display itself, without a given purpose, function or a clear use. It is thus the supreme expression of the modern movement canon. This is non-representational, abstract architecture in which the tautological aspect touches on the mystical. As Paul Rudolph rightly points out, this building shows us the most human, spiritual Mies. 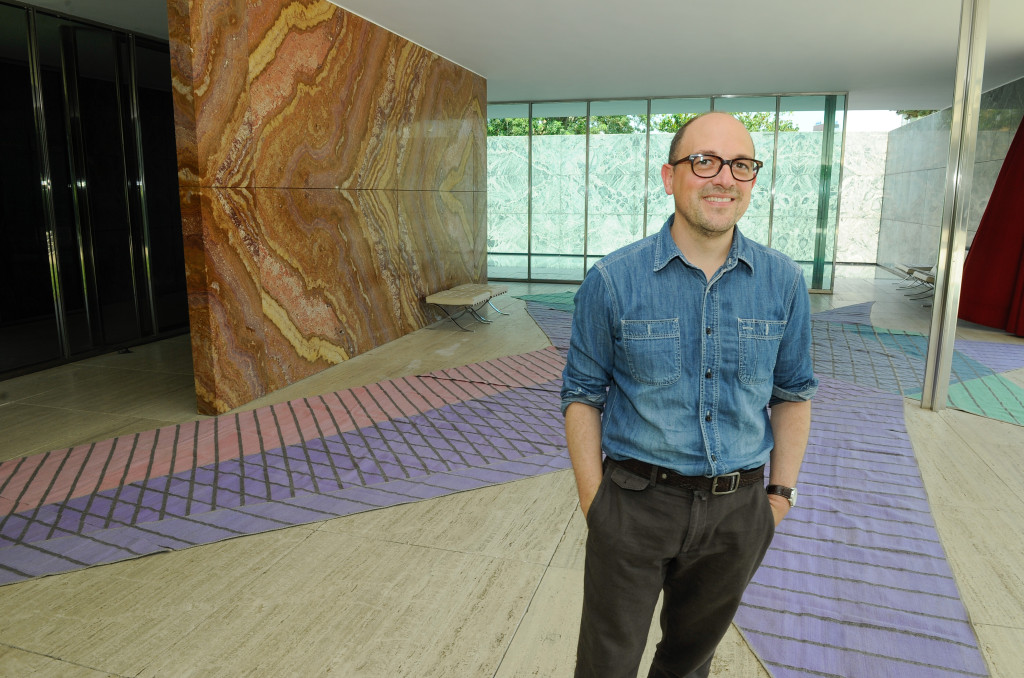 Santiago Borja, (Mexico City, 1970) graduated in architecture from the Iberoamerican University in Mexico City and completed a Master’s degree in Theory and Practice of Contemporary Art and New Media at the Paris 8 Univesity, France. He has also participated in several academic programmes at Central St. Martins in London and the National Arts Centre in Mexico.

His current work is based on the intersection between art, architecture and anthropology. His most emblematic projects include Site for Le Corbusier’s Villa Savoye in Poissy, France, Fort Da/Sampler in the Neutra-VDL House in Los Angeles, In the Shadow of the Sun at the IMMA in Dublin, Divan at the Freud Museum in London, Décalage at the El Eco Experimental Museum in Mexico City, Halo in the Le Corbusier Pavillon, CIUP Paris. He is currently preparing Thought-Forms for the Sonneveld House in Rotterdam, his participation in the 2015 Chicago Architecture Biennial, and an installation at the Frank Lloyd Wright Foundation in Taliesin West, Arizona. He has received the support of numerous institutions including the Jumex Foundation/Collection, The Graham Foundation in Chicago and the Marcelino Botin Foundation in Santander, Spain, amongst others. He is currently a member of the SNCA-FONCA.

From Mies’s Berlin to Freud’s modernist Vienna and the primitive jungle of Totem and Taboo, the basic presupposition that the early twentieth-century has bequeathed to us is that we are living in a hostile external world; that any relation of human subjects to external objects—including buildings—can be predominantly expressed in terms of mastery or destruction (which ultimately proves mutual). On the one side unfolds the play of light reflections on Mies’s Glass Tower model of 1922, and underneath that side, expands the dark horror of the void in Murnau’s Nosferatu: A Symphony of Horror of the same year. The main argument presented in this lecture is that the vampires and animist spirits invented by expressionism’s literary and cinematic unconscious haunt the birth of modern architecture by foreshadowing an effigy of its phantasmatic Gestaltung.

Spyros Papapetros is associate professor of history and theory in the School of Architecture and a member of the executive committees of the Program in European Cultural Studies and the Program in Media and Modernity at Princeton University. He studies the intersections between art, architecture, psychoanalysis, and psychological aesthetics. He is the author of On the Animation of the Inorganic: Art, Architecture, and the Extension of Life (University of Chicago Press, 2012), the co-editor (with Julian Rose) of Retracing the Expanded Field: Encounters between Art and Architecture (The MIT Press, 2014), and the editor of Space as Membrane by Siegfried Ebeling (Architectural Association Publications, 2010).