The Barcelona Pavilion was designed by Ludwig Mies van der Rohe and Lilly Reich as the German Pavilion for the Barcelona International Exhibition, held on Montjuïc.

The Barcelona Pavilion, an emblematic work of the Modern Movement, has been exhaustively studied and interpreted as well as having inspired the oeuvre of several generations of architects. It was designed by Ludwig Mies van der Rohe and Lilly Reich as the German national pavilion for the 1929 Barcelona International Exhibition. Built from glass, steel and different kinds of marble, the Pavilion was conceived to accommodate the official reception presided over by King Alfonso XIII of Spain along with the German authorities.

After the closure of the Exhibition, the Pavilion was disassembled in 1930. As time went by, it became a key point of reference not only in Mies van der Rohe’s own career but also in twentieth-century architecture as a whole. Given the significance and reputation of the Pavilion, thoughts turned towards its possible reconstruction.

In 1980 Oriol Bohigas, as head of the Urban Planning Department at the Barcelona City Council, set the project in motion, designating architects Ignasi de Solà-Morales, Cristian Cirici and Fernando Ramos to research, design and supervise the reconstruction of the Pavilion.

Work began in 1983 and the new building was opened on its original site in 1986.

The materials
Glass, steel and four different kinds of stone (Roman travertine, green Alpine marble, ancient green marble from Greece and golden onyx from the Atlas Mountains) were used for the reconstruction, all of the same characteristics and provenance as the ones originally employed by Mies in 1929.

Mies van der Rohe’s originality in the use of materials lay not so much in novelty as in the ideal of modernity they expressed through the rigour of their geometry, the precision of the pieces and the clarity of their assembly.

Mies van der Rohe and Lilly Reich designed a chair, especially for the Pavilion, consisting of a leather upholstered metallic profile that over the years has become an icon of modern design. To such an extent, in fact, that the Barcelona chair is still manufactured and marketed today.

The sculpture is a bronze reproduction of the piece entitled Dawn by Georg Kolbe, a contemporary of Mies van der Rohe. Masterfully placed at one end of the small pond, the sculpture is reflected not only in the water but also in the marble and glass, thereby creating the sensation that it is multiplied in space, while its curves contrast with the geometrical purity of the building.

Drawings of the Barcelona Pavilion 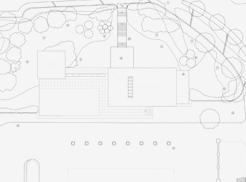 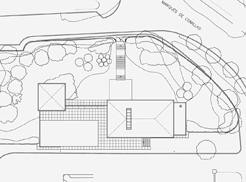 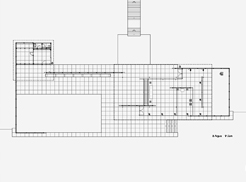 Ludwig Mies van der Rohe was born on March 27 1886 in Aachen, the son of Jakob Mies (a dealer in marble) and Amalia Rohe. In 1913, he moved with his wife Ada Bruhn to Werder (on the outskirts of Berlin). There his daughters Marianne and Waltrani were born, followed some time later by Dorotea, who would subsequently change her name to Georgia. Until World War I, Mies’s social and professional relations had been with well-to-do families, but after 1918 everything changed: he separated from his family and, through Hans Richter, came into contact with the contemporary avant-garde, particularly Van Doesburg, Man Ray, Hilberseimer, Walter Benjamin and Raoul Hausmann.

During his participation in the Weissenhof housing exhibition at Stuttgart, between 1925 and 1927, Mies established a relationship with interior designer Lilly Reich that was to last until 1939. They worked together on the Glassraum (glass room) for the 1927 Stuttgart exhibition, on the Barcelona Pavilion, on the Tugendhat house in Brno between 1928 and 1930 and on the house they presented at the 1931 Berlin exhibition.

In 1930 the mayor of Dessau proposed that Mies direct the Bauhaus, where he would succeed Hannes Mayer, who had been in charge since 1928, when he took over from the founder Walter Gropius. His assistants during this period were Lilly Reich and Hilberseimer. The outcome of the 1931 elections was a Nazi majority at the Dessau Municipal Council, who decided to close the Bauhaus. Given this situation, Mies moved it to Berlin as a private centre under his own name. After having negotiated with the Nazi minister Rosemberg, in 1933 he decided to close the centre rather than cede to ideological pressure. Lack of funds also influenced this decision.

Lilly Reich was introduced to the field of architecture after having studied design and textile industries. In 1908 she moved to Vienna, where she worked at the Wiener Werkstätte, an association of artists, architects and designers who prusued the integration of all the arts in a common project, without distinction between major and minor arts. She also worked briefly with the architect Josef Hoffmann, one of its ideologists. She relocated to Berlin in 1911, already working independently. There she joined the Deutscher Werkbund, an association founded in 1907 formed by industrialists, architects and artists that defined the German industrial design. Lilly Reich stood out for her ideas and organizational capacity, acquiring more and more responsibilities until she was appointed director in 1920.

Between 1925 and 1938 Lilly Reich and Mies van der Rohe collaborated closely on different projects, and in 1928 she was named “artistic director” of the German section of the Barcelona Exhibition, thus sharing the same position held by Mies van der Rohe. Her situation in the National Socialist Germany was not easy, she spent three years in a forced labor camp during the war. After the conflict, she struggled to try to get Berlin back to normal, and was responsible for the restoration of the Deutscher Werkbund, which was finally restored in 1950, after her death.